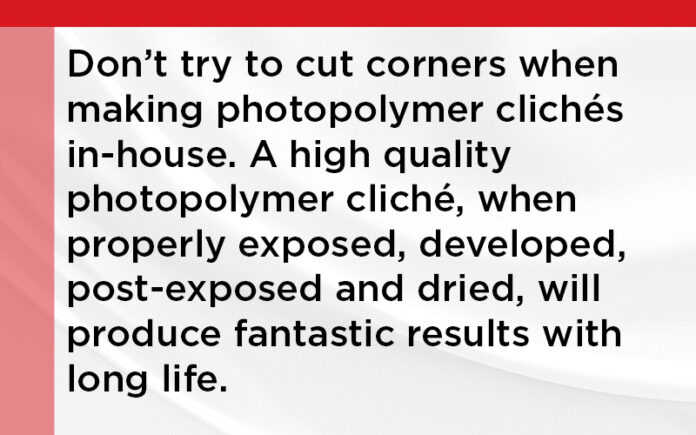 While the polymer cliché-making process is pretty straightforward, there are several little things that can go wrong, with the end result being poor image quality.

Film orientation for cliché making should always be emulsion down. That means that when you’ve got the film in front of your and the image is in the horizontal and vertical orientation that you want to etch it into the cliché at, the actual emulsion/ink/toner is on the back side of the film, never on the top side. When the image is on the wrong (top) side, the UV light can refract as it passes through the film, undercutting the image. The result is loss of small text and graphics with thin line weights, as well as poor resolution along the edges of the images.

The density (opacity) is of paramount importance. If the image on the film cannot block the UV light from transmitting through to the surface of the polymer cliché during exposure, your image definitely will not have a consistent etch depth. If it is really insufficient, the result may be an image that won’t print at all. If you don’t have a transmission densitometer to test film density (few companies do) simply try holding the film over a little tiny LED penlight, or other small, bright, pinpoint light source to see if the light is clearly visible.

If you’re not sure, contact me and I will send you a test film having sufficient density to use as a baseline in side by side testing with whatever film you’re producing for cliché making.

The same goes for line screen film orientation, since you’re most likely using a two-exposure polymer material. The emulsion side of line screen films will be the duller of the two sides on the film. Make sure it is dull side down for the second exposure.

Use the right line screen. Quality line screen has dots that have a consistent density throughout (over their entire surface area). They are like tiny hockey pucks on the surface of the film, as opposed to little mounds. You can’t make a line screen in-house. Buy a quality line screen film, and keep it clean and free of creases, scratches, tape and other stuff.

What is the right line screen? It depends. 120 line/cm2 with a 90 percent dot works great for most applications. If it doctors a little inconsistently, try 150 line/cm2. If you need to put more ink down on the part, go down to 100 line/cm2. Anything with larger dots, such as 80 line/cm2, will probably end up resulting in an image that has so much ink in it you can’t pick it all up from the cliché with any degree of efficiency or resolution.

If your exposure unit doesn’t have vacuum, you’re wasting you’re time. You cannot get a good contact by trying to sandwich your cliché and film in between two separate pieces of foam and glass. You need vacuum and a clear pliable vacuum blanket. The amount of vacuum required depends on the size of the exposure unit, but it shouldn’t be possible to lift the vacuum frame up once the vacuum has drawn down. You want intimate contact between the film and the surface of the cliché. Anything less will not provide consistent results, period.

Warm up your vacuum by running the unit for several minutes. Depending on the type of pump, once warmed up, it will draw more vacuum than when cold.

Polymer cliché materials are very light-sensitive. It should go without saying that when making photopolymer clichés you must work in an environment that is free of ambient UV light. No UV light should be present in the room, so if that means shielding overhead fluorescent lighting, or using a UV-free light source, get it done.

The lights within the exposure unit should be relatively low wattage so you can control the exposure. Normally the UV lights in exposure units will be around 350 Nm (nanometers) in wavelength with an output of 20W-40W. The number of bulbs will depend on the size of the exposure unit, but there should be multiple bulbs in order to provide a consistent exposure.

Warm up your UV bulbs while you’re warming up the vacuum pump. Bulbs take a few minutes to ramp up to full output from cold.

Replace your bulbs before they burn out. Depending on the manufacturer, UV bulbs’ output deteriorates rapidly (like a 40 percent reduction) between 450 and 700 hours of use.

If you’re using alcohol wash photopolymer, DO NOT use “denatured alcohol solvent” from the local hardware or home improvement store. Buy developer from your cliché supplier. What’s the difference? The stuff for the cliché supplier should be 98 percent pure, with a specific denaturing agent, which you usually can dilute up to 15 percent with distilled (not tap) water. The stuff from the local hardware or home improvement store could be denatured with something else, and is probably already diluted up to 40 percent with water from who knows where. Save yourself the pain, and buy the right developer.

If you’re using water wash photopolymer, DO NOT use tap water from a municipal water supply. Use distilled water. Why? Because municipal water can have chlorine, fluoride and all sorts of other chemicals in it that can have a negative impact on development.

When you’re developing a cliché in either alcohol or distilled water, you should “stop” the action of either once the cliché has been removed from the developing bath.

For alcohol wash clichés, stop with water – distilled water to be specific.

For water wash clichés, stop with alcohol. The same alcohol that you’re supposed to use for developing alcohol wash clichés.

Which begs the question: Why use water wash cliché at all? You still need the alcohol developer to stop your water development.

What happens if you don’t “stop” your developer? According to Bill White, technical manager with Innovative Marking Systems, the continued action of the developer can undercut the line screen dots and edges of the image, resulting in poor image quality and lower durability.

A lot of people skip these two very important steps of the cliché making process, because they’re always in a hurry to get to press. Don’t skip either.

Post-exposure (UV light only, without any film or vacuum) hardens the bottom and edges of the image area, as well as the sides of the dots left by the line screen exposure. Failure to post-expose leaves these surfaces unhardened, and therefore significantly less durable.

Drying removes any excess developer and stop bath fluids from the photopolymer. If you skip drying your cliché can be spongy or tacky as a result of the residual fluids trapped near the first few microns of the material. This invariably will cause issues in doctoring, and may even allow the doctor ring on the ink cup to dig into the surface. This usually results in the photopolymer folding up like an accordion, with ink running all over place. 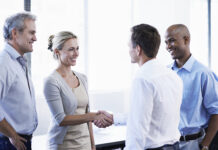 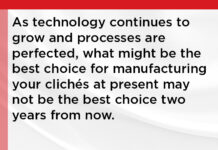 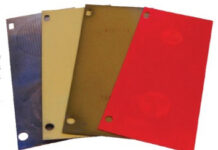