Solid modeling CAD programs have facilitated designers’ use of complex contours in plastic product design. In addition, marketing pressures have driven higher levels of decoration with more frequent model changes. The result has been a significant increase in the number of parts which are best decorated in the mold. In-mold decorating using automation was featured at a number of booths at NPE 2000.

In addition to the ability to decorate contours, in-mold decoration offers the additional advantages of improved adhesion (achieved by emplacement of the decoration while the substrate is molten), rapid decoration changeover, the ability to hard-coat simultaneously with the decorating step, and the elimination of a stage in the manufacturing process, along with all the handling and inventorying that accompanies it. The major disadvantages are the additional investment, increase in cycle time, and the limitations on the recycling of scrap parts. Some applications, such as highly contoured automobile dashboards, can only be accomplished by in-mold decorating.

Two basic methods of in-mold decorating were featured at NPE 2000: insert molding and foil in-mold decorating. The insert molding process involves printing the image on a flat, rigid substrate and forming it with pressure and/or heat using matched metal dies. In this way, a semi-rigid insert is formed which can be placed in the mold. The plastic is injected into the mold behind the insert and it becomes part of the moldment. The robot arm which removes the finished part also emplaces a fresh set of inserts in the same operation.

The ability to print the original decoration on a flat surface permits the use of a wide range of printing techniques resulting in sophisticated and highly detailed decoration. The decoration is modified to account for the deformation which takes place during the forming stage. Although the cost of the insert must be accounted for, this technique can accommodate a wider range of complex contouring than any of the other plastics decorating methods. This process gained wide acceptance in the automobile industry for use in woodgrained interior panels and is also being used for telephone headsets.

Engel demonstrated a fully automated insert molding system on its tiebarless molding machine at NPE 2000. General Electric provided thermoformed, diecut inserts second-surface printed with registered graphics as a means to demonstrate its films developed for this purpose. According to Mike Laurin, Film Technology Manager for GE Structured Products, “The exciting aspects of our new process are the abilities to do multiple cavities combined with shot to shot product differentiation.”

Avery Dennison’s Soft-Touch and Avloy films are also used for the insert process. Avloy is a formable paint film supplied in a roll form with clear and base coats applied. There is an adhesive on the moldment side of the film. The film is thermoformed, trimmed and insert molded. It is currently in use for rocker panels on the Toyota Avalon. Soft-Touch is also intended to eliminate the need to paint plastics. Jeff Birkes, Marketing Manager, Long Life Films Division of Avery Dennison, reports, “Our new Soft-Touch film laminate is a replacement for urethane tactile paint systems with greater mar resistance and it can do print patterns at no additional cost.” This product could open new design opportunities to designers as well as supporting applications whose volume cannot justify the establishment of a paint facility.

Nissha offers a similar system which did not make it to the show due to the last minute cancellation of the molding machine it was to utilize in its demonstration. Nissha has a new development in deep draw inserts which is currently on the market in Europe on Nokia cell phones.

Foil in-mold decorating was featured by Kurz-Hastings and Pro/Mark Corporation (using a feeder system built by fellow ITW division, Giulianelli). This process uses a heat transfer similar to the type that can be used on hot stamp machines. The carrier film is stretched from the supply reel through the mold to the take-up reel. The mold closes on the film and the molten plastic is injected into the mold. The image transfers to the moldment leaving a void on the carrier film. A polyester carrier film is used to provide heat stability. While only two cavity molds were demonstrated at NPE 2000, Bruce Downs, Business Manager of Pro/Mark, reports that “sixteen cavity molds have been built for small parts.” Registration and print area (300mm2 maximum) issues cause cavitation limitations to be application sensitive.

This system works well with resins such as polystyrene, ABS, SAN and polycarbonate. Polyethylene and polypropylene can be molded with difficulty, but nylons are a problem because their high molding temperatures destroy the carrier (the maximum molding temperature is 550° F). Glass-filled resins up to a level of 15% can be foil in-mold decorated. Press requirements are multiple phase injection and a minimum 280mm opening. The Kurz-Hastings process can handle contours to a depth of .75″ with a minimum of a 10° angle. The radius leading into the depth should be at least as great as the depth. The Pro/Mark people prefer to limit the depth of draw to .08″; however, their technique can print cleanly to the outside of the part, avoiding a flash of ink at the edge.

While this process cannot accommodate the same level of complexity as insert molding can, it does not increase the cycle time and the foil is less costly than the insert. The recent development of hard coating has had an impact as well. “Cellular telephone manufacturers and automotive interior groups are actively pursuing in-mold foil decorating because of the advantages of decorating and hard-coat applied simultaneously,” according to Roy Bomberger, Technical Manager of Kurz-Hastings.

Nissha USA, Inc. offers its Simul-forming process which is somewhat of a combination of insert molding and foil in-mold decorating methods. In Simul-forming, a film passes through the open mold just as in foil in-mold decorating; however, the robot which picks up the finished moldment has a heating element on its back side which softens the film so that suction can pull it into the cavity. The mold then closes on the film and the molten plastic is injected. There is a coating of adhesive on the moldment side of the film to ensure adhesion.

Although new developments and market pressures have brought renewed interest to the several processes which fall into this category, in-mold decorating is not really a new process. In fact, the technique can trace its roots to the early sixties (Alpine process, 1960 Hanover Messe).

One of the oldest varieties of in-mold decoration involved printing directly from a plate in the mold, a process referred to at the time as printing-in-the-mold. Depending on the patent, the ink was placed in the mold from a transfer roll, a powder coating or through a porous surface from a reservoir. When the molten plastic entered the cavity, the ink adhered to the surface of the part. A modern day offshoot of this process is in-mold painting through a powder coating applied before each shot. Applied Composites, Corp., St. Charles, IL, currently uses in-mold powder coating technology for SMC compression molding.

A contemporary competitor to printing-in-the-mold was the process known at the time as labeling-in-the-mold. This process used diecut labels which were adhered to the mold surface with static electricity, although at least one patent called for the use of vacuum. The plastic was then injected into the cavity and the label adhered to the molten surface. This process offered the advantages of being able to utilize the full range of printing techniques to produce the image and easy changeover of decoration without changing the mold. However, hand application of the decoration often caused registration difficulties which resulted in longer molding cycles. For some applications, robots have been used to solve this problem. This technique continues to be used successfully for many applications ranging from housewares to keycaps.

In-mold decorating offers unique opportunities for plastic product designers, particularly for highly contoured parts requiring complex, multicolored decoration. However, most applications are not this demanding. Therefore, processes such as heat transfers, hot stamping and pad printing should be examined for their suitability to a given product before turning to in-mold decorating, as those processes are usually less costly for most applications. As always, it remains the engineers obligation to use the lowest cost process that will meet the design requirements. 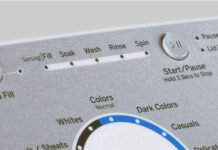 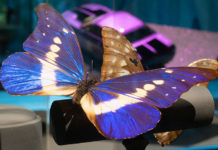