The term “roll on” stamping can be confusing and actually includes two very different application methods, both of which are “rolled on.” Terms without a common definition such as roller-die, roller-head, mandrills, spindles, arbors and fixtures can further muddy the whole picture.

Let’s start by defining the two main branches of the roll on process. The fundamental difference between the two methods is the type of applicator, meaning the actual heated surface that contacts the part to be printed and provides the heat and pressure required for foil transfer. One method utilizes a flat die. The item to be printed is rolled across the surface of the die – the die is the applicator (see illustrations 1 and 2).

Another method utilizes a rotating, cylindrical silicone rubber coated roller that is heated. In this case, the roller is the applicator. Sometimes this type of cylindrical applicator is called a roller die but often it is just called the roller or a roller-head (see illustrations 3 and 4). For the purposes of this article, the first method will be called flat die roll on and the second method roller die roll on. Both methods have applications for which they are best suited and both methods are equally adept at applying heat transfer labels as well as hot stamping foils. Before going into the nuances of each process, an understanding of what is going on at the point of transfer will help solve roll on stamping challenges.

The relationship that underlies all roll on stamping is defined as a constantly advancing line of contact between the surface of the part and the surface of the applicator where successive portions of the applicator and successive portions of the part come together at zero relative velocity to one another at the point of contact. It does not matter if the applicator is a roller die or a flat die. The rule is the same. The phrase constantly advancing line of contact refers to what is going on where the die meets the part. An analogy would be a tire rolling across a road. Imagine the road is a flat die and the part to be printed is the tread surface of the tire. The line where the tire is in contact with the road would be the constantly advancing line of contact. If the road is hot and hot stamping foil is put between the road and the tire, the tire would be printed around its periphery by flat die roll on hot stamping. The statement about zero relative velocity means that both surfaces are traveling at the exact same speed when they come together. Consider the wheel analogy and think about what happens for the brief period of time when a particular spot or successive portion of the wheel is in contact with the road. The road and the tire surface are not moving relative to each other. If they were, the tire would not be rolling, it would be skidding. Instantaneous speed between the wheel surface and the road is zero at the point of contact, even though the axle of the wheel may be traveling across the road at a relative 60 miles per hour.

The words spindle, fixture, mandrill, and arbor are commonly used to refer to the holding tool and its rotating components. In some machines, the part comes up to meet the die and then rolls across the die; other machines bring the die down to the part and then roll the part across the die. Still yet, other machines have a stationary spindle with bearings and the die comes down to meet the part and then moves in a manner to cause the wheel to roll against the die. This technique – the road spinning the tire – rarely is seen in current hot stamping machine designs.

The flat die roll on method is not limited to only round parts. Other shaped parts can be rolled across a flat die with specialized multi-axes, computer-controlled machines that compensate for the shape of the part and control the part movement while in contact with the die to make it look round to the process. To test if this method will work for a particular application, place the item to be printed on an inclined surface. If it rolls away and the area to be hot stamped remains in contact with the inclined surface, then it can be hot stamped by this method. It does not matter if the part cross section is truly circular or it is oval, elliptical, or some other convex cross section, as long as it can roll.

Now reverse conditions where the tire is heated instead of the surface. If the foil is placed on the road and the hot tire is rolled across the foil on the road, then the road would be decorated by roller die roll on hot stamping. A roller die can roll print a flat surface and a flat die can roll print a round surface, but there is always just one more thing. A roller die can be used to roll on hot stamp flat surfaces (appliance control fronts is a very common market for this method) but a roller die also can be used to roll on round parts. Here, the set up is like two wheels rolling together where one wheel is the heated roller die and the other is the part to print (see illustration 5).

So far, both flat die and roller die roll on methods on straight walled parts have been discussed. There is, however, one more special version of roll on stamping that can utilize either one of the methods while meeting the technical requirements of the process. That is printing tapered or conical parts.

In the real world, all plastic molded parts have some draft angle. Most decorators will agree that when the draft is less than one degree, it generally can be ignored in a roll on application. When the draft exceeds one degree, it must be addressed as a tapered part or the quality and consistency of decoration may never be satisfactory. Any amount of taper can be printed successfully as long as it is constant. Imagine trying to hot stamp a band around a traffic cone. If the cone didnt have the square base, it would roll on the ground. However, it would not roll in a straight line but instead, in a circle. If rolling on a band using a flat die, the band on the die would actually be an arc. The arc would be the same radius that the cone traces when it rolls on the ground. When the cone is brought into contact with the die, instead of rolling straight across it, the cone would have to rotate and swing on the same radius that it would if rolling on the ground.

A cone also can be printed with a roller die as long as the roller die is made to the same conical angle as the piece to be printed. The roller die is no longer cylindrical; rather, it is conical. Then the die and the part to be printed are arranged small end to small end and rolled together. Contrary to ones first thoughts, the cones have to roll together small end to small end with their longitudinal axes converging in space at the center point of the conical radius. If a conical roller was used to apply a band on a conical part with the small end of one cone placed against the large end of another cone and it then was attempted to roll them together against one another, they would lock rather than roll.

Roll on stamping encompasses such a wide variety of methods of application and techniques that it is impossible to go into great detail on any one of them in the scope of this article. These are the basics, the fundamental arrangements that can be used to put the die and the rolling part together or put the rolling die and the part together. Proper foil arrangements, tension, and peel-off provisions are the next most important aspects of successful roll on stamping after the basic rule of zero relative velocity is met. If this rule is not met, there is no amount of twiddling and tweaking that will make the job run right. If you think you may have one of these jobs, take a good hard look at it. Find out where its skidding instead of rolling and youll usually find the problem.

Neil Meador is an engineer and general manager of Permadur Industries decorating machinery division. After 23 years in contract decorating and machine building, Neil and his skilled associates joined the Permadur Industries family of companies and established the Machinery Division dedicated to the advancement, design, and building of servo-operated decorating machines. For more infomration on Permadur, visit www.permadur.com or call (800) 392-0146. 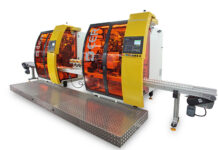 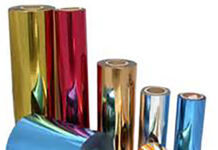 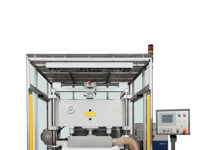