The newest generation of laser marking additives formulated into polymers is a substantial advancement in technology which is proven both enabling and cost-saving. Progressive material science formulations achieve superior marking contrast, line edge detail and speed on plastics that traditionally have been difficult, if not impossible, to laser mark. Designed for affordable Fiber, Vanadate and YAG lasers, these formulations operate in the near infrared spectrum 1060-1070nm. This article discusses dark-colored and light-colored laser marking contrast applications designed for “thermal chemical surface carbonization.” This is the most common polymeric surface reaction and a distinctively different chemical pathway from “foaming” and “color” change mechanisms.

Polymers that can be marked by lasers are those that absorb laser light and convert it from light energy to thermal energy. Since most polymers do not possess absorption properties at 1060-1070nm, experts utilize additives, fillers, pigments and dyes that enhance the absorption of laser energy for localized color changes. The material science chemistry for achieving high contrast and color laser marking is both art and science. Contrary to popular belief, a single laser additive that solves all marking problems does not exist. Vastly different formulation chemistries and laser optics/set-up parameters are used, depending upon the desired marking contrast and functionality.

The most common surface reaction mechanism is termed thermal chemical “carbonization” or “charring”, (Reference Photo B.) whereby, the energy absorbed in the substrate raises the local temperature of the material surrounding the absorption site high enough to cause thermal degradation of the polymer. While this can result in burning of the polymer in the presence of oxygen, the limited supply of oxygen in the interior of the substrate results in charring of the polymer to form a black or dark marking contrast. The darkness or lightness of the mark is dependent on the energy absorbed, as well as the materials unique thermal degradation pathway.

Laser additives improve the degree of contrast, which can be further intensified by changing the laser set-up parameters. Polymers possess inherent characteristics to yield “dark-colored” or “light-colored” marking contrast. (Reference Photo B.) Each polymer-colorant grade, even within the same polymeric family, can produce different results. Colorant compounds that contain low amounts of TiO2, carbon black and mixed metal oxides also absorb laser light and, in some instances, improve the marking contrast.

Commercially available laser additives are supplied in granulate and powder forms. Granulate products can be blended directly with the polymer resin, while powder forms are converted to masterbatch. Some of these additives contain mixtures of antimony-doped tin oxide and/or antimony trioxide that impart a “grayish” tint to the natural (uncolored) substrate opacity. Color adjustments are made using pigments and dyes to achieve the final colormatch appearance. Based upon the specific additive and polymer, the loading concentration level by weight (in the final part) can range from 0.01 percent to 4.0 percent. Both granulate and powder form can be supplied as precompounded color material or color concentrate.

During the laser additive loading/colormatch chemistry, it is not uncommon for a finished product to contain less laser additive than the calculated amount. This problem almost always relates to non-uniform distribution during extrusion or molding. Simple adjustments to the molding machine, such as increasing the back pressure and screw rotation speed, will resolve most issues. Homogeneous distribution/dispersion of laser additives throughout each part is critical to achieve optimal marking performance. For extrusion, injection molding and thermoforming operations, precolor compounded materials versus color concentrate yields better uniformity. Hand-mixing should be avoided. Mold flow and gate type/location are important factors.

The time required to mark a part is a function of the polymeric substrate, the number of vector lines drawn and how fast the laser beam/galvanometer scan head draws all of the lines. Laser software and the type of vector fill – unidirectional, bidirectional or serpentine also affects the marking time.

Without laser additives, some well-known industrial products could not be cost-effectively manufactured. One interesting application is “on-the-fly” laser marking for undercap promotions on linerless beverage closures. Turnkey systems are capable of marking unique graphics and alphanumeric text at speeds up to 1,500 – 2,000 closures per minute. (Reference Photo B.)

The advancements in laser technology have been instrumental to the rapid development of the newest generation of laser additives. The emergence of nanosecond fiber lasers is one of the most significant advancements for marking, welding and cutting. Fundamentally, fiber lasers are different than other solid state marking lasers. With fiber lasers, the active medium that generates the laser beam is dispersed within a specialized fiber optic cable. In contrast to fiber-delivered lasers, the entire path of the beam is within fiber optic cable all the way to the beam delivery optics.

Fiber lasers yield superior beam quality and brightness. The metric for beam quality is M2. The smaller the M2 value, the better the beam quality, whereas M2 = 1 is the ideal Gaussian laser beam. A laser with superior beam quality can be focused to a small spot size, which leads to high energy density. Fixed and variable pulse fiber lasers with pulse energy up to 1 mJ and high power density can mark many historically difficult polymers, including Nylons, Urethanes and Acetals. Vanadate lasers also possess a small M2 value with shorter pulse width than fixed fiber and YAG lasers. Pulse duration influences the degree of heat and carbonization into the material. Short pulse width can be advantageous for sensitive polymeric applications.

All beam-steered Fiber, Vanadate and YAG lasers are not created equal. The hardware and software components a laser manufacturer incorporates into its systems makes significant difference in marking contrast, quality and speed. A primary attribute is the power density (watts/cm2) at the mark surface (which is different than the raw output power of the laser). The output mode of the laser beam is critical to the marking performance. These output modes relate to factors including the beam divergence and power distribution across the diameter of the laser beam.

Power density is a function of focused laser spot size. Focused laser spot size for any given focal length lens and laser wavelength is a function of laser beam divergence, which is controlled by laser configuration, mode selecting aperture size and upcollimator (beam expander) magnification. Pulse repetition rate and peak power density are critical parameters in forming the mark and achieving the optimal contrast and speed. The arithmetic curves of power versus pulse repetition rate are inversely proportional. High peak power at low frequency increases the surface temperature rapidly, vaporizing the material while conducting minimal heat into the substrate. As the pulse repetition increases, a lower peak power produces minimal vaporization, but conducts more heat. Additional contributing factors that influence the marking contrast and quality are, of course, beam velocity and the vector line separation distance.

Scott R. Sabreen is founder and president of The Sabreen Group, Inc., which is an engineering company specializing in secondary plastics manufacturing processes – surface pretreatments, bonding decorating and finishing, laser marking and product security. He has been developing new technologies and solving manufacturing problems for over 30 years. He can be contacted at 972.820.6777 or by visiting www.sabreen.com or www.plasticslasermarking.com. 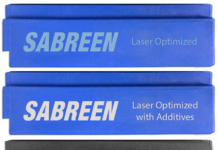 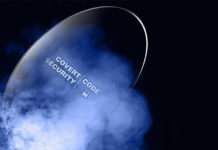