Within the field of decorating and graphic arts are several proven and well-documented application and curing methods. Equally, the graphics themselves can be generated on a variety of platforms that provide output that is readily usable and allows for reproducible quality with the desired mechanical characteristics.

One method of curing that has been used in decorating for nearly 40 years, is UV curing – sometimes known as an arc lamp. Basically, the output of these specialized lights is tuned to produce photonic energy in the UV band of the electromagnetic spectrum, which, when used with UV inks, creates a very fast curing mechanism (in parts of a second).

An alternative to the UV arc system is the light emitting diode (LED) system, which also produces UV but at a specific wavelength resulting in predefined monochromatic output.

To differentiate between the general designations of UV and LED, it is necessary to look at the spectrum that these systems produce. A classic UV lamp (medium-pressure arc), produces an output spectrum that is dependent on the dopant (additive) that is used in the bulb. For example, a mercury-doped bulb will produce a UV-C-rich spectrum (short wavelength/high energy) and an iron-doped bulb will produce a UV-A-rich spectrum (long wavelength/less energetic). Generally speaking, both UV lamps will produce output in the UV range of 200 to 420 nm. The dopants determine the emphasis. An LED array produces monochromatic UV-A output, the most popular being 365, 385, 395 and 405 nm (see Endnote).

The two variables that are generally considered when defining output of UV or LED are dose (in mJ/cm²) and intensity or peak (measured in mW/cm²) in a given band (UV-C, UV-B, UV-A). Dose is energy density, or, put another way, the amount of energy available to create the photopolymerization reaction (and the subsequent C-C bonds, which determine “cure”). It is time related, specifically exposure. Peak is how hard the light is driven and is a determining factor with heavier coat weights or opaque (darker or white) colors, for which the energy needs to be driven through the layer to ensure throughcure.

One of the realities of an arc lamp is that it not only produces UV but also longer wavelength visible light and IR (heat). The latter is generally undesirable in plastics decorating. As an LED has a precise output in UV-A, it doesn’t produce any heat (or ozone, for that matter) if all of the energy is absorbed into the ink.

Therefore, the LED solution removes some of the challenges of heat management on a decorating line, simplifying the process and reducing costs. As both UV and LED curing are very fast, they lend themselves well to continuous production processes, as the decorated piece can be handled immediately. In an indexing line, the LED can be switched off during the time that a part is not present, thereby saving energy costs.

As LED arrays have a much smaller form factor – and are less complex – than their UV counterparts, they easily are integrated into production lines. Spotcure units also are available, where a light engine produces the LED output and, with a fiberoptic guide(s), is delivered as a precise spot source, which is ideal for clamshell production.

Generally, LED arrays are built in modular form and can easily be expanded to a given width if requirements change. Similarly, if a different wavelength is needed – due to, say, a change in formulation – the LED chips can be exchanged, which also is a handy feature for service or repair.

Chips with mixed wavelengths are commonplace, for example 385 and 395 nm, which are evenly distributed to give a homogenous output over a given area.

An increasing amount of industrial production machinery is driven by a programmable logic controller (PLC) or some electronic controller that provides operating signals. It also receives feedback from components – one of which can be an LED system, which is a solid-state device that can easily be programmed into a production sequence.

In addition to the ability to be switched off (and on), LED arrays can be programmed to match the width of the area of the graphic, which also saves energy.

In environments where LEDs are switched on only when they are needed, this will provide energy savings as compared to a UV arc lamp, which typically must remain on or in standby when operating. LEDs also have better longevity; but when they do need to be replaced, it can be costly. A precise return on investment (ROI) matrix needs to be established to quantify exact savings.

The standard UV platforms in decorating have been compared; however, typically it is a selection of which type is most suitable for companies that want to transition from solvent or water-based and how they can best use radiation curing technology. One big benefit of UV LED is the lack of volatile organic compounds (VOCs) and all their attending logistics (and costs).

To highlight a practical example, a recent LED installation was the result of a cost/technology review to replace 75 feet of drying oven with a more compact and cost-effective curing solution. The end user was a container decorator that uses PP, PE and PPE base stock running through the decorating line at 3,000 units per hour.

Following a full process evaluation, a set of air-cooled LEDs with an output of 14 W/cm² were installed (the nominal requirement was 4 W/cm²) to cure at 3,000 units per hour. The medium-term plan was to upgrade the production line to 6,000 units per hour, and the LED units were sized accordingly (power units and controllers prepared for later expansion as well). The surface of the printing area needed to be pretreated, via a corona unit, and was already part of the existing line.

The inks’ application process and LED curing were extensively tested, and an optimum set-up was developed. The main challenge was to change the formulation of the ink to get the desired wear resistance, as this typically is achieved with an arc lamp (using UV-C).

In this scenario, not only were operating costs drastically reduced, the factory real estate of the long oven also was freed.

As an aside, LED-curable adhesives often are used with plastics in assembly industries to simplify the process and save costs and time.

As a number of plastic assemblies are specified with clear or semi-clear polycarbonate parts, the adhesive can be activated by “shooting through” the plastic to the joint surface. An LED spot cure unit also can deliver a large amount of concentrated dose to the face of a joint where the photopolymerization propagates and gives the adhesive the required characteristics.

Some assemblies have very narrow tolerances, so a low-impact curing system can assist in maintaining precision in the finished component.

Although LED technology offers many benefits, like all other systems, there are some drawbacks that need to be considered before making a transition. Not all ink formulations are available in LED format, and those that are don’t always offer the same end result as a conventional system – think color density, mechanical resistance, etc.

As it has evolved, LED output has increased but still suffers from having to have the irradiated part relatively close to the emitting window. Although LEDs have good longevity, this can easily be influenced by poor maintenance, unsuitable working conditions or poorly calibrated electronics. Housekeeping and maintenance need to be clearly defined and regularly undertaken.

So far, LED has been shown to provide considerable benefits with manageable challenges in decorating, but that doesn’t exclude the traditional UV arc lamp solution, as it can provide high output in UV-C (short wavelength/high energy) that is needed for hard or finish coatings, as they are activated between 220 to 260 nm. An LED is not able to match the output or operate at this wavelength. A good example would be the base and topcoat on a metallized cap for cosmetics (using PV-D), which requires excellent wear resistance.

An illustrative UV adhesive example would be needle bonding, where a syringe needle assembly is glued to the syringe barrel. Both the adhesive and UV system are precisely metered to conform to the strict oversight and guidelines of the Food and Drug Administration and Good Manufacturing Practices.

There are a number of instances where LED and UV are running as a hybrid system, allowing the end user to get the best of both worlds. They also can be combined with UV excimer (ultra-short wavelength/ultra-high energy) technology to provide an interesting combination of finishes (such as matte) for high-value decoration or haptics.

As a final point, the LED inks (and adhesives) mentioned, are readily available from a variety of well-known and respected suppliers in the marketplace. Suppliers will be able to guide decorators accordingly. Similarly, there are well respected manufacturers of radiation curing systems that have a deep lexicon of application knowledge and can provide a deeper insight into LED technology and how it might work with sister technologies.

Chris Davis is head of sales – web and industrial systems for IST America, headquartered in Shorewood, Illinois. A degreed mechanical engineer, Davis joined the industry in 1993, driving narrow- and mid-web press sales until 2015, when he joined IST. Areas of expertise include printing, converting and industrial applications. For more information, visit
www.ist-uv.com. A Real-World Roundtable Discussion on UV Inks and UV Curing 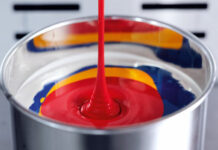