Looking back to the late 1980s, it is easy to see how the industry has evolved. At that time, pad printing was just beginning to compete with hot stamping and screen printing. Additionally, sealed ink cups had just been invented.

By the mid-90s it was not uncommon for large manufacturers to have dozens of pad printing systems dedicated to printing the same parts, over multiple shifts, for years. Meanwhile, hundreds of small contract decorators survived by running service orders. While a few of the dedicated systems featured automatic loading and unloading, the majority were manual load/unload, single-color machines with pneumatic drive systems and very little, if any, flexibility.

As manufacturing moved off shore, smaller shops disappeared. By the 2008 recession, only those decorators that had made the conscious decision to upgrade their equipment and processes were left. On the other hand, many equipment and consumable suppliers either expanded to include other technologies as part of their offerings or disappeared.

Today, those companies that are the most successful with pad printing are utilizing newer, highly efficient pad printing systems that offer flexibility and substantially more process control than those offered by their older counterparts.

First, start with efficiency, or, more specifically, energy efficiency. The average cost of commercial electricity in the United States in 2018 was $0.1074 per kilowatt (Kw) hour.1 Adding in the associated fees that most power companies tack on, that cost ends up being a loaded cost of ~ $0.1794 per Kw hour.

A typical, single-color, 90 mm pneumatic pad printer working at an average of 1,000 cycles per hour will require about 2.7 natural liters (NL) of compressed air at 90 p.s.i. That is the equivalent of about 950 cubic feet per hour, or 16 cubic feet per minute. It takes about 0.25 horsepower (HP) to generate one cubic foot per minute (CFM).

Therefore, it takes about .207 Kw to generate the necessary horsepower to generate one CFM. Thus, it will take 3.3 Kw to power that printer for one hour.

Taking the math a step further, $0.1794 x 3.3 Kw x 2,000 hours = $1,184.00 per shift, per year to operate the pneumatic printer. The equivalent all-electric pad printer, however, requires only 0.5 Kw per hour to do the same amount of work. That equals $179.40 per shift, per year to operate. Assuming the air delivery system is 100% efficient, that equals a savings of $1,004.60 per shift, per year. Considering that a leak resulting in a line pressure drop of just 25 millibars equals a 2% loss of efficiency2, the savings that most people see when they switch to electric machines is substantially higher.

The third thing to consider is further increases in system efficiency with the addition of automated loading and unloading. Imagine a company with integrated multi-axis robots to load and unload its pad printing systems. It is running large parts on multiple-color (six or seven) systems, with multiple axis part conveying. That company can expect to see double-digit increases in efficiency as a result of integrating robots. Even a simple plug-and-play, single-axis automatic eject can have a significant impact on system efficiency.

Next, consider flexibility: Can the machine be easily reconfigured for the next job? Having the ability to switch out different ink cup diameters and cliché sizes, as well as the ability to adjust the pitch (center-to-center) dimensions on accessories, is especially useful when tasked with printing a wide variety of part geometries. So, too, is the ability to activate or deactivate axes of motion of conveying parts when tasked with printing on different planes within a single machine cycle. Furthermore, having the ability to remove multiple ink cups and clichés as a single assembly, and quickly replace them with another, while maintaining tight tolerances, is beneficial. Some machines allow operators to change over six- or seven-color jobs in 10 minutes or less, even when completely different part geometries are involved.

Finally, consider process control. It is safe to assume that few, if any, of the people reading this still have an old flip phone in their pocket, much less an old rotary-dial phone sitting on the corner of the desk. So why do some people insist on using pad printing technology that is the technological equivalent of an old, rotary phone?

Modern, all-electric pad printing systems give the operator independent, digital control of pad stroke distances, speeds in all axes of motion, programmable delays in fractions of a second at the beginning and end of each axis of motion, and many other process controls that older, pneumatic – and even some electrical-mechanical – machines do not offer.

Think of the convenience of simply programming a 25/100th second delay in the transfer stroke to optimize image quality with the touch of a button instead of spending 20 to 30 minutes fiddling with ink viscosity and the blow dryer taped to the machine’s guarding.

In a different scenario, perhaps imagine a set of four parts with similar geometries. With a programmable, stepper motor-driven rotary table accessory, it’s possible to tool up a 12-station dial for three sets of four nests, program the indexing accordingly, and then print one version of the parts and change tooling with the touch of a button instead of having to use tools to switch out tooling manually.

John Kaverman is president of Pad Print Pros, Inc., an independent consulting firm specializing in pad printing machines, methods and materials. Kaverman, who holds a degree in printing technology, has more than 30 years of industry experience in capacities including production, process and systems engineering, technical sales and service. For more information, visit www.padprintpros.com. Challenges and Solutions in Contract Decorating 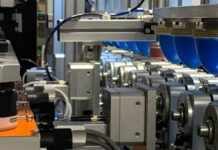 Choosing the Right Pad Printer for the Next Project