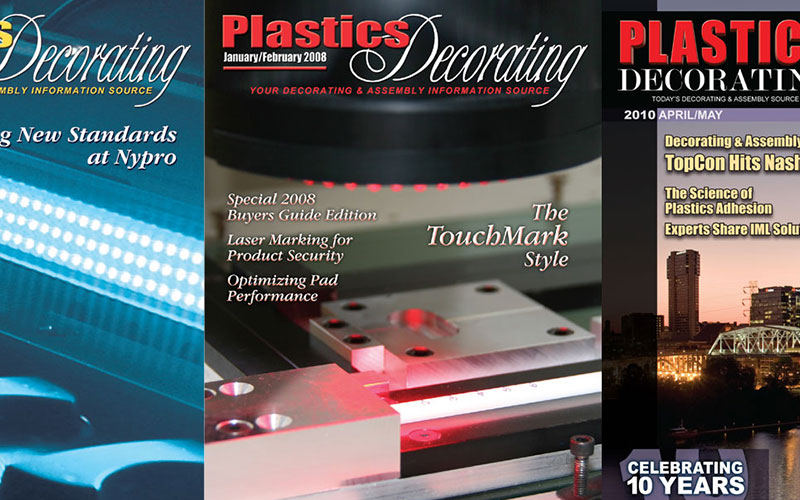 Some things that began in the year 2000 were built to last. The television program “Survivor” crowned its first winner and became the most popular TV show of the season. Oprah published the first issue of her magazine, O. The first three-man crew was assigned to live on the new International Space Station. And, 20 years ago, Peterson Publications launched a new magazine dedicated to covering decorating and assembly processes for the plastics industry – Plastics Decorating.

Looking back, January of 2000 seems like an unlikely time to launch a new magazine. Y2K was supposed to cause chaos across the world at the stroke of midnight on New Year’s Eve, shutting down computers due to a supposed programming error. But, for a plastics industry preparing for NPE2000, the timing was right.

Peterson Publications, Inc., specializes in niche industry publications, primarily in the manufacturing spaces for print and plastics. One of its first magazines was for the Foil & Specialty Effects Association – InsideFinishing – which covered finishing and decorating techniques for paper. Jeff Peterson, owner of Peterson Publications, thought the concept could be expanded into plastics.

“In one of my first employments out of college, I was involved with the marketing and sale of hot stamping foils – for both graphics and plastics applications – so, I had past experience in both areas,” explained Peterson. “After about five years of growing InsideFinishing, I began to think that there would be a market for a magazine that covered the decorating of molded plastics, just as there was for the graphic arts industry. We had many contacts, especially from the hot stamping area, to help us launch Plastics Decorating in 2000, and we timed our first issue around the NPE show that year.”

“We are so thankful to our early supporters of Plastics Decorating and for those who have continued to support us 20 years later,” stated Peterson. “It has been an amazing ride.”

Early articles also featured industry stalwarts as writers and contributors, thanks to Peterson’s strong industry connections. Soon after launching Plastics Decorating, Peterson became involved with the SPE Decorating & Assembly Division. He was asked to sit on the board of directors and has remained for the past 18 years, currently serving as chair.

“Through the Division, I met many people who have helped us along the way to build the editorial content and support us with advertising,” Peterson said. “Jordan Rotheiser (Rotheiser Design), who passed away in 2015, was a great help with our magazine for several years. He was active in SPE for 55 years, and he shared his extensive knowledge by writing a series of articles for Plastics Decorating.”

Other recurring authors, including Scott Sabreen (The Sabreen Group) and Paul Uglum (Delphi, Aptiv and currently Uglum Consulting), came from the magazine’s ongoing involvement with the Division. Ken Holt from Dukane has been a frequent contributor, as was Keith Hillestad (United Silicone – who passed away in 2010) and John Kaverman (Innovative Marking Systems and currently Pad Print Pros).

“Two of our most dedicated supporters of Plastics Decorating were Jordan and Keith,” explained Peterson. “I met them right after we started the magazine – they were both on the SPE Decorating & Assembly Board of Directors. Jordan and Keith were keys to our success as a magazine and became close friends. At least once a year, when we have an in-person board meeting, we still raise a toast to them both.”

Plastics Decorating has been published on a quarterly basis from the beginning. After 20 years, that equals 80 magazine issues – and, with an estimated average of 48 pages per issue, that’s more than 3,800 pages of industry knowledge shared by experts from all areas of plastics decorating and assembly.

In the very first issue, publication staff tackled the “Challenges with Screen Printing Polyethylene and Polyproplyene.” Soon after, the magazine addressed such topics as selecting the right hot stamping equipment, the return of metallized plastics to automobiles and ultrasonic welding set-up parameters. Container decorating challenges have consistently been featured – but the technology has changed. That first article in 2002 discussed common issues with screen printing and pad printing on cylinders, but the latest article on container decorating featured digital decorating processes. Other early articles touched on promotional products decorating with pad printing, the hot-plate welding process and flame plasma surface treatment.

Events from organizations such as SGIA and ANTEC have long been featured in the magazine – although this year, the events went digital, due to the ongoing COVID-19 pandemic. And, while SPE’s Decorating & Assembly Division has hosted Topical Conferences for many years (organized and managed by Plastics Decorating and Peterson Publications), Plastics Decorating hosted its first event in 2019: The Surface Summit. NPE – the launch point for the magazine in 2000 – also appears every three years in the magazine’s pages.

Plastics Decorating also has stayed very involved with tradeshows and conferences by being a consistent exhibitor at events that include NPE, the SGIA Show (now PRINTING United) and several of the PLASTEC shows around the country. This has allowed the magazine to enjoy additional distribution and exposure at industry events and to update the mailing list with current subscriptions.

In 2000, only 26.1% of the US workforce over the age of 25 used the internet or email at work. Today, the Plastics Decorating website sees more than 5,250 website visitors per month, and more than 6,000 readers view the magazine’s digital edition through their desktop computers or mobile devices.

Although paper copies of those early magazines now are collector’s editions, the last nine years of Plastics Decorating magazines are online in their entirety. A few articles from earlier issues can be found on the website, too – stretching all the way back to the very first issue of Plastics Decorating. These article archives ensure the knowledge shared by industry experts is accessible to anyone searching for answers related to plastics decorating and assembly – from engineers in injection molding companies and designers at original equipment manufacturers (OEMs) to those on the factory floor.

Twenty years after publishing its first issue, Plastics Decorating is proud to be a technical and educational resource for the plastics industry. We are thankful for the support of the advertisers represented within the pages of the magazine, and we are grateful to all those who have shared their expertise over the years. With two decades in the rear-view mirror, we’re looking forward to learning what changes we will see in the next 20 years.

“I am very proud of what we have been able to do with Plastics Decorating, but we are dedicated to not sitting still,” concluded Peterson. “We know the industry will continue to change, and our plans are to change with it. We are excited for the future.”