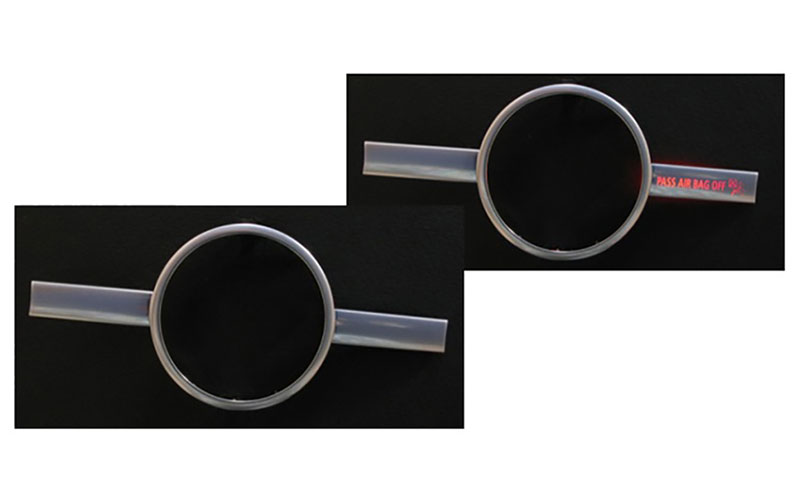 All plastic decoration requires skill and knowledge, together with the correct choices of materials and processes. This is particularly true when the desired outcome is a metallic appearance or piano black appearance. The issue is not that the processes themselves are difficult – many are well understood – but there are many variables that determine what the right choice is for any given application. The right choice is not the same for every given appearance and application, but also will depend upon the volume, geometry and economics of any given opportunity. 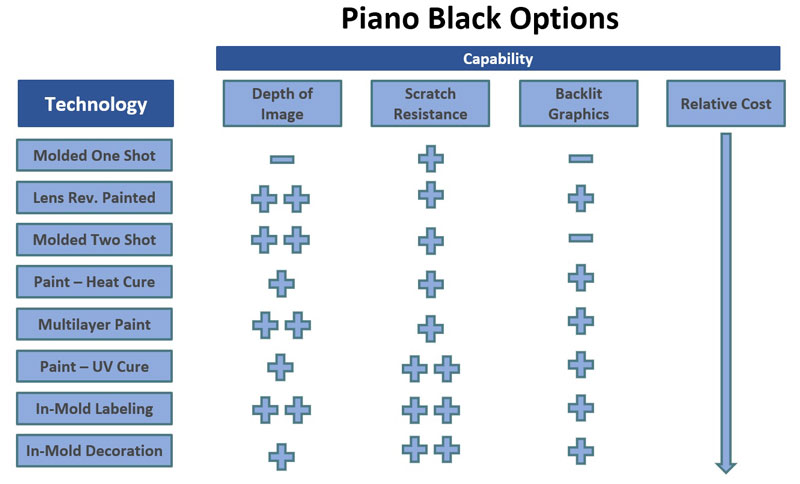 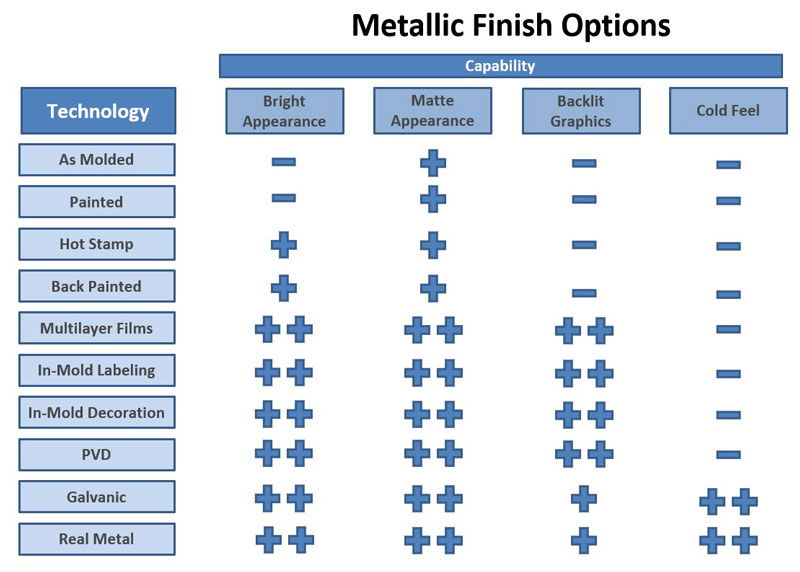 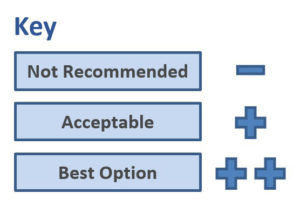 These appearance choices are so complex because there are many options, each with a different set of advantages and disadvantages. The correct choice depends upon the target design (geometry), appearance (color and gloss) and performance requirements.

The first step, regardless of the desired part, will be to determine the target appearance and performance. This will define the constraints to limit the selection process. Each process has a range of capabilities, and when a process is pushed to the extremes of its capabilities there will be issues with manufacturability or cost. In addition to other considerations, some processes are very scalable from low to high volumes while others work best only in high volumes. Finally, do not assume all the answers are known. Even in mature processes, new capabilities have emerged that might have been assumed to be impossible at one time.

It is important to be involved early enough in the design process to guide the designers to the best solution for their intended outcome. To do this, it is important to understand the capabilities and limits of all the alternatives. If the options have not been researched lately, it is worth reviewing any assumptions.

Piano black is a high-gloss black currently very popular in automotive interiors, telecommunications and computers. It is often used with best effect with low-gloss black as a contrast or with various chrome details. The primary issues with piano black are that small defects are very visible, fingerprints show up on parts that are touched often, and cleaning can lead to micro scratches that damage the appearance.

There also is an issue with making piano blacks match each other. Even within a given technology, there are many dyes and pigments available, and they create visibly different appearances. The most desirable piano black surfaces create the appearance of depth by using translucent or clear coatings over opaque black substrates or coatings. This makes it difficult for single instrument measurements to fully capture the appearance differences. As a result, when using piano black parts from differing technologies in the same application, or matching standards produced by a different technology, visual comparison is more reliable than color instrument measurements alone.

As molded plastic, piano black is the lowest cost for applications that are not frequently handled or cleaned. The best results are obtained when the tool is highly polished and dynamic temperature control is used when molding. If the tool is selectively textured, a part with both high- and low-gloss regions can be made in a single shot. The primary drawback to molded plastic is that plastic surfaces are soft, compared to the other options, and are, therefore, easier to damage in use or when cleaning. The depth of image is generally poor compared to other options.

Clear plastic – with the reverse side decorated, either by painting or printing – can create a nice piano black appearance. It is most often used in combination with other processes to apply protected graphics or metallic appearances to the same part. With the increased use of displays in appliances and vehicles, this method is used to create a piano black surround, sometimes including hidden until lit graphics as well. The addition of clear, hard coating improves the durability of the display lens in high-touch applications.

Molded, two-shot, clear-over-black also creates a piano black appearance. Although this is not the lowest cost option, it allows the integration of functional structure into parts designed for lighting or display applications. Like reverse-painted clear plastic, the primary issue is the scratch resistance of the plastic.

A single layer of paint on plastic is the most common way to achieve a piano black surface when a durable, chemically resistant surface is needed. Various options exist, but the trend is toward using dual cure systems because they provide a better resistance to micro scratches caused by repeated cleaning. Although painting is the most common solution, process yields remain a significant issue. Cleanliness is critical, and the best painters use extra care in cleaning parts prior to painting. Also, due to the surface energy of drying paint, a fat edge effect can occur if the design and process are not carefully managed.

Multilayer painting is much the same as a single layer of paint, other than it consists of a first layer of black conventionally cured paint with a clear coat applied over the first layer. The use of a two-layer system allows the application of graphics by pad printing between the layers. The translucent or clear coating also gives a superior depth of image. The clear coating is often UV cured or dual cured to provide the expected durability.

In-mold labeling consists of insert molding a decorated film. The film can be formed prior to molding or in the molding process. Films have been developed with hard coatings curable after molding, improved haptic and optical properties, and that are easier to clean. This allows not only piano black surfaces, but surfaces that include other decoration and back lighting features. In general, in-mold decoration works best when the part volumes are higher or when it is necessary to make several different appearances in the same geometry. As with other methods, it is critical to understand and follow the design standards for each set of materials and process.

In-mold decoration is similar to in-mold labeling in that the process takes place within the molding tool. The primary difference is that only the ink systems are transferred to the plastic part. Systems that include UV-cured hard coatings have increased the range of capabilities. The design constraints are generally tighter than with in-mold labeling, and the piano black generally has less apparent depth.

Metallic surfaces can be very reflective, specular or have a more diffuse, matte finish. They also can be textured, have a brushed appearance or be tinted to add color. In addition, they also can have a wide range of functional properties. They can either shield radiated emissions or can be clear to them, both important properties for telecommunications applications. Metallic finishes can be “cold” to the touch, or in the case of as-molded, feel much warmer when touched.

As with piano black there are many options, so it is important to understand the design limits and capabilities of each option to select the best for any given application.

As-molded metallic appearances can be the lowest cost but are severely limited by part design constraints. Any knit lines orient the pigments, creating very visible lines. Still, this solution is widely used in packaging and consumer products. It is occasionally used, when the geometry permits, in automotive and appliance applications. As with piano black, the surface of as-molded plastic is softer and more sensitive to damage than the other options.

Painted metallic appearances work best when the target appearance is a matte finish. Metallic paints can be single layer or multilayer systems. One popular option is a multi-layer system that creates an anodized appearance. It is possible to get a very reflective painted surface, but this involves a multi-layer paint system with a very thin metallic layer, which allows the metallic pigment to lay flat. Because of the processes and materials, it is a high-cost solution and is used mostly in specialty applications. Painting or printing the reverse side of clear plastic can be used to create a metallic appearance. This is most often used in combination with other appearances in applications.

Hot stamp foils can produce many metallic appearances ranging from very reflective to matte. Traditionally this has not been considered a very durable surface, but advances in technology have dramatically increased the useful range of capabilities. Hot stamp has been developed for high-end automotive interior applications, developed the capability to hot stamp on some level of 3D surfaces and has successfully developed hot stamp materials that are capable of surviving harsh automotive exterior applications such as grilles. The main constraint is that – for the most part – fairly flat surfaces with a sharp radius at the edge are needed for the best results.

In-mold labeling or in-mold decorations both are capable of incorporating metallic appearances in a wide range of appearances.

Physical vapor deposition (PVD) has gained favor for having a significantly smaller waste stream than plated plastic. It involves a wide variety of processes, ranging from evaporation of materials like aluminum to sputtering of metal alloys. The amount of metal deposited is quite small, so in most applications the metal is then protected with a clear coating. The clear or tinted surface coating also serves the purpose of adjusting the color, and/or gloss to create a matte finish if required. Hidden until lit and lit chrome appearances can be produced by first applying a thicker metallic layer, removing some of the metal with laser ablation and then applying a thinner metallic layer to provide a uniform daylight appearance that can be backlit as needed. PVD coatings have been developed that do not require clear hard coatings for many applications.

Electroplated plastic, also known as galvanic process, is still widely used to create metallic finishes on plastic parts. A wide range of appearances is available, from highly reflective to matte finishes with a variety of specialty colors, including a black chrome appearance. The metallic surface has a pleasant, cool feel to the touch and with two-shot technology backlit chrome details are possible. The primary weakness is separation from the plastic substrate during temperature shock or cycling if the incorrect plastic or process is used.

The best way to determine the current available chemistries and appearances is to discuss the options with the major plating chemistry suppliers. REACH-compliant (Registration, Evaluation, Authorization and Restriction of Chemicals-) solutions that involve no hexavalent chromium-free and perfluoro octane sulfonate (PFOS) are now available.

Recent innovations have greatly expanded the range of appearances to include complex textures. Some companies have taken advantage of advanced lasers to create complex textures and appearances in tool steel. This technology allows both textures previously not possible as well as exact reproduction cavity to cavity. Additionally, developers have created a plating process that more uniformly deposits the metal on the plastic so the texture is replicated without washing out the appearance.

Real metal – either applied or with molded-in plastic – also is an option. The differential expansion coefficients make in-mold metal difficult to execute successfully and can lead to field failures, depending upon the end-use environment. Generally, larger parts are produced with applied metal and smaller ones with insert molding. For example, complex and distinct textures can be produced on surfaces for both the automotive and appliance industries.

This is just a short overview of the primary processes available to produce piano black and metallic options. When deciding to include them in products it is important to take a deeper dive into the limits and advantages of each option. Start early in working with the customer or designer to optimize the design for both durability and manufacturability.

Finally, combinations of processes to achieve specific appearances and performance are not only possible but sometimes desirable. Combining technologies can both add value and reduce the long-term risks for failure in the field.