Contamination in its various forms often is the largest contributor to yield loss in plastic decoration. This is especially true with decorated plastic that has highly reflective surfaces, such as high-gloss physical vapor deposition, piano black paint and high-gloss hard-coated lenses. Even with less sensitive processes and appearances, contamination can be a significant problem. Given the impact on yields and the bottom line, it would make sense to use every technology available to reduce contamination-related losses.

One obvious, but often misunderstood, method is placing the decorating process in a cleanroom. In order to set up and effectively implement cleanrooms in plastic decoration, it is important to understand what a cleanroom is, what it does and what it does not do. Begin by identifying what level of cleanliness is needed to produce the desired outcome. Then identify what steps in the process require the additional protection provided by the cleanroom and which do not.

ISO 14644-1 defines a cleanroom as a room in which the concentration of airborne particles is controlled, and that is constructed and used in a manner to minimize the introduction, generation and retention of particles and microbes inside the room and in which other relevant parameters – such as temperature, humidity and pressure – are controlled as necessary. So essentially, it is a controlled environment that limits airborne contamination. ISO 14644 goes on to define the levels of cleanroom and the distribution of particles found in each level.

Since cleanrooms for medical applications require additional attention, this article will focus on decorated plastic only. So, a cleanroom is a controlled environment that excludes and removes contamination by replacing the dirty air with clean air – that is, by dilution of contaminates in the air with a constant source of clean filtered air using HEPA (High Efficiency Particulate Air) filters.

The makeup air can be either unidirectional, either top to bottom or across the room, or a non-unidirectional airflow, in which the air enters from the ceiling and exits low on the walls. Although this is less effective at sweeping the room clean than a mixed/vertical flow cleanroom, it is generally the best approach for plastic decoration. It is less expensive than the raised floor unidirectional approach but often is adequate if correctly designed and maintained.

A system that recirculates the filtered air and adds makeup air is more efficient and lower cost than a single-pass system in that it allows more air exchanges at a lower cost. Important control parameters, which will vary with the decoration process and room design, are the number of air exchanges and the flow rate of the air.

Once the room is functioning, the level of particles in the air must be measured regularly to ensure the desired level of cleanliness. This is accomplished with a light-scattering airborne particle counter. These instruments can count particles in the range of 0.3 to 10 microns. They can be handheld, bench-mounted or remote-mounted. For most decoration processes, the handheld works best because it allows the flexibility to measure air cleanliness in various locations.

Notice there is something missing in the definition of a cleanroom: It looks only at those particles that are 10 microns or smaller. This is because particles larger than 10 microns fall slowly from the air to deposit on surfaces. This means there are effectivity two classes of contamination that must be dealt with. The first is contaminants that remain suspended in the air until they bump a surface or are attracted to it due to static charge. The second is larger particles that will fall slowly from the air due to gravity. To be effective in plastic decoration, both smaller particles suspended in air and those larger particles must be controlled. For example, a 10-micron particle will fall out of the air at a rate of seven inches per minute – and the larger the particle, the faster it falls from the air. Surface cleanliness is defined in SCP classes (Surface Cleanliness by Particle Concentration) ISO 14644-4.

Cleanroom surface cleanliness is less dependent on airflow management and more upon the discipline and practices. Parts and surfaces inside of the cleanroom can be contaminated due to transfer and deposition. Transfer comes from “dirty” surfaces brought from outside of the cleanroom (parts or packaging are common sources). Deposition is from airborne particles due to gravity, electrostatic attraction or air turbulence.

The practical aspect of this is that if parts are cleaned in a cleanroom, care must be taken to either trap or extract the contamination from the room. The object is to capture and remove contamination rather than just moving it around. Blowing off larger particles of dirt results in their moving only a relatively short distance and then redepositing on surfaces, including the parts and fixtures. This also means that if there is turbulent air flow, dirt can move from other surfaces to the parts intended for cleaning.

What level cleanroom is best

In selecting what class of cleanroom to use, consider just how clean an environment is needed to achieve acceptable results. This will depend upon the decorating process and its sensitivity to contaminates. A typical starting target should be a Class 7 cleanroom. In some cases, a Class 8 is acceptable.

The best strategy for implementing a cleanroom is to create a nested construction – one that isolates the sensitive areas and provides protection to exposed parts prior to decoration. Although it is a good idea to place paint lines in a clean environment, it often is more cost effective to only enclose the sections where parts are introduced and removed from the line. For other processes – like inkjet, physical vapor deposition, printing the load and preparation areas – in some cases, the entire process can be enclosed in the room. The cleanroom should have a slightly higher air pressure than the surrounding plant to ensure contamination does not flow into the room.

In some cases, many of the characteristics of a classic cleanroom can be implemented in a “white room” – a room that has many of the characteristics of a cleanroom, filtered air and controlled environment, but does not meet the ISO standards. Filtered replacement air should remove particles larger than 10 microns. A prefilter may be needed, in some cases, due to the level of dirt in the environment. The rules to maintain and successfully operate a white room are the same as a cleanroom – filtered air, positive pressure compared to surrounding areas and disciplined, controlled flow of materials.

A problem that plastic decorators often have is that particles that are large enough to cause problems are not readily visible. The smallest particle a person can see is variously reported as 10 to 50 microns. In plant situations, contamination that can cause significant problems is not easily seen. Quick and easy tools include UV light to show some fibers or illuminating a part with a bright light, parallel to the surface, to make some contaminates visible. There is a tendency for operators to think they are doing a good job cleaning because they do not see the contamination that causes problems in the process.

Fortunately, tools exist that allow measurement of the level of contamination on surfaces. PMT has developed a number of tools to measure and characterize both particles on surfaces and the rate that they fall from the air.

These tools, as well as dirt traps, can be useful in understanding where dirt is coming from in the process as well as determining if the cleanroom is operating properly.

One of the issues with cleanrooms at this class range is that they tend to give a false sense of security. Having a cleanroom will not be useful if it is not properly maintained and if the operators are not disciplined.

When designing a cleanroom, first map the flow of materials, people and waste in the cleanroom so that these are efficiently controlled. To maintain a cleanroom, all sources of contamination must be controlled. Cardboard, paper products, brooms, food and beverages should be avoided. Containers, parts and fixtures entering the cleanroom must be cleaned prior to entering the room so that they do not become a source of introduced contamination. Both people and parts should be moved into and out of the room through an airlock to prevent contamination from surrounding plant air.

The largest source of contamination in a cleanroom often is people. A person produces hundreds of thousands of particles just moving around the room. Worse, clothing produces additional fibers and may transport dirt from surrounding areas. Typically, particles in the 30- to 100-micron range result from people and their behavior. Unfortunately, particles in this size range can cause significant defects. Keeping the number of people and amount of movement in the cleanroom to a minimum are critical to success.

Plastics are particularly difficult to keep clean since they develop a significant static charge as the plastic cools after injection molding. They also tend to develop static charge when handled and transported. It often is best to deionize parts at the press and package them in clean material and seal them from the environment as soon as possible. Since no cleaning is perfect, it is better to prevent contamination when possible, rather than increase cleaning later. If cleaning is needed, it often is useful to clean the parts just prior to bringing them into the cleanroom to remove as much dirt outside of the cleanroom as possible.

It is important to control any process that might generate contaminants in a clean environment; this includes conveyor systems or processes that by their nature produce some level of contamination. Placement of processes in the cleanroom and management of air flow will be significant factors in success or failure. Not surprisingly, cleanrooms need cleaning on a regular schedule. It is important to wipe down surfaces, vacuum the floor with a HEPA filter vacuum (shop vacuums only move dirt around) and damp mop on a regular basis.

Dressing for the cleanroom

Proper attire depends upon the level of cleanroom required. It is helpful to have a separate gowning (changing) area for those going into and out of the cleanroom. A common mistake is for personnel to wear their cleanroom gowns outside of the cleanroom and, as a result, bring additional dirt into the cleanroom when they reenter.

Using a cleanroom in plastic decoration can provide significant impact on yields, but only if it is done correctly. It is of critical importance to control the entire life of the part from molding through shipping and to understand what the sources of contamination in the process are and how to control them. In implementing a cleanroom, take the time to understand the process, design an effective solution and train personnel in the proper procedures to maintain and operate a cleanroom. There are a series of ISO standards – ISO 14644-X – that cover many aspects of cleanroom design and operation. It is well worth the time to study the many resources and references available to better understand the best solution for a given process. If possible, visit plants using cleanrooms to better understand the issues and advantages related to cleanrooms. 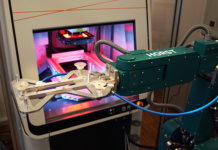