High-performance waterborne coatings are available in different curing mechanisms including evaporation, oven bake and UV-curable. Most coatings that qualify as waterborne coatings contain some organic co-solvents in the fluidizing media. These tend to be low-molecular weight polar ketones, alcohols and esters. Typical chemical composition is approximately 50 percent water, 45 percent solids and 5 percent co-solvents (can range from 2-20 percent of the fluidizing medium).

Conversely, with solventborne coatings, the fluidizing medium is an organic solvent or blend of organic solvents such as MEK, MIBK, xylene, toluene, etc. All of the various spray and dip coating methods can be utilized including air atomization, HVLP, airless and air-assisted airless. This gives waterborne processes an advantage over high-solid paints that can’t be dip coated due to higher viscosities. Spray guns are easily cleaned with water or water-based solutions rather than paint thinner or acetone.

For drying single-component waterborne coatings, the water and co-solvents are removed from the surface of the paint coating via evaporation (physical drying or baking, without chemical cross-linking). The water below the surface migrates to the surface at a speed based upon the rate of diffusion of the coating. This process continues until all of the water has risen to the surface and is evaporated. The time in which the water is evaporated and the coating is dry is based upon the amount of water to be removed (i.e. thickness of coating and percent water in the paint) and the evaporation rate. The evaporation rate is dependent upon the vapor pressure difference between the water in the coating and the air being circulated over the surface of the part. The vapor pressure difference is a function of the humidity ratio (i.e. temperature and relative humidity of the circulating air) and to a smaller degree, the velocity of the air across the substrate.

A common mistake when curing waterborne problems arise is the tendency to increase temperature and airflow velocity. In actuality, re-circulating “humid” air during curing decreases vapor pressure differential and increases cure time. Curing time for waterborne coatings is much longer than the solventborne counterparts. Adequate flash-off time between the spray booth and oven is necessary when force drying or baking the coating, otherwise solvent popping may result. It also is necessary to ensure that the surface temperature of the part is greater than the dew point to prevent condensation from forming. While this is generally not a problem during warmer months, it can be a concern during colder months.

During warmer weather, high humidity can extend flash-off and dry times. If the humidity is high, the water vapor released during drying has no place to go, and the film will not cure. By providing moderate air flow and increased temperature, a continuous supply of fresh air can be provided to the coating to give the air more capacity to hold moisture. All water must be removed from the coating before parts are exposed to freezing temperatures. Failure to do so may result in a loss of adhesion, as the remaining water will expand upon freezing.

Scott R. Sabreen is founder and president of The Sabreen Group, Inc., which is an engineering company specializing in secondary plastics manufacturing processes – surface pretreatments, bonding decorating and finishing, laser marking and product security. He has been developing new technologies and solving manufacturing problems for over 25 years. 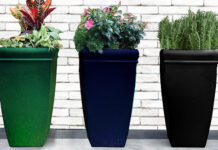