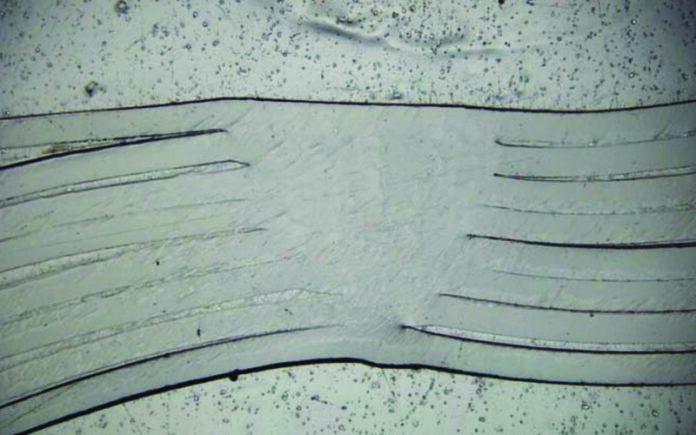 The use of laser welding of thermoplastics is increasing in a broad range of applications due to the many advantages it has over competing methods. It can be used in both surface heating and through transmission laser welding. In some applications, it is desirable to laser weld optically clear thermoplastics to each other. This is easier to accomplish with surface laser or infrared heating if the source has a wavelength or broad band of wavelength where the optically clear thermoplastic absorbs the laser radiation on the surface or the bulk. For through transmission laser welding, methods that rely on one of two approaches are described. The first approach relies on the use of laser-absorbing dyes or carbon black that could be optically transparent or opaque. The second approach relies on using longer wavelength laser sources that are absorbed on the surface or bulk of the optically clear thermoplastic.

Laser welding of thermoplastics is used in a wide range of applications due to its numerous advantages, including non-contact heating, shorter cycle times and lower cost. Laser welding of thermoplastics can be achieved using two different heating methods: surface heating and through transmission heating [1-5]. For surface heating, one can either expand the laser beam and simultaneously heat the surfaces of both parts using mirrors, as shown in Figure 1. It is also possible to use a laser line beam or laser spot with a scanning mirror to rapidly scan and heat the surfaces of the parts, as shown in Figure 2. For most plastics, and especially optically clear plastics, when using laser sources with wavelengths in the range of 800 to 1100 nm, an absorber such as carbon black needs to be incorporated into the plastic part for laser absorption and heating. However, when using laser sources with wavelengths that are above 1500 nm, it may not be necessary to include an absorber because many thermoplastics can absorb some of the laser energy. Therefore, for surface laser heating it generally is easier to weld optically clear plastics together by switching the laser source or even using a broad band infrared source [6].

For through transmission laser heating, one part is transparent to the laser while the second usually has an additive, such as carbon black, to absorb the laser radiation and convert it into heat (Figure 3). In most of those cases, the laser sources (e.g. laser diodes, Nd:YAG, fiber laser) have a wavelength in the range of 800 to 1100 nm, since most thermoplastics are highly transparent in that range. Therefore, through transmission laser welding of two optically clear plastics becomes more difficult. Two approaches have been developed to overcome this difficulty. One approach uses special dyes, painted-on absorbers or thin absorbing films, while the second relies on laser sources with longer wavelengths.

For many through transmission laser welding applications, adding small amounts of carbon black (typically ranging from 0.1% to 1% by weight) is an effective way of incorporating a laser absorber into one of the plastic parts. However, if neither part was molded with carbon black added, it is impossible to add carbon black without remolding one of the parts. In addition, there may be applications in which it is desirable for both parts to be optically clear, and in some cases the interface after welding also must be optically clear. Therefore, if switching the laser source is not desired or possible, then it is necessary to either make one of the optically clear parts laser-absorbing while retaining its transparency in the visible light range or to make just the weld interface laser-absorbing.

TWI and Gentex corporations studied the use of infrared dyes for through transmission laser welding of plastics [7]. They studied the electromagnetic absorption of different dyes and pigments and were able to develop dyes that are nearly completely transparent in the visible light range but absorbing in the 800 to 1100 nm wavelength range. The dyes were introduced into the bulk plastic during molding of the absorbing part [8]. Alternatively, they could be coated on the weld surface [9]. This ultimately led to the development of Clearweld, which is now commercially available in different grades.

When the interface does not need to be visibly transparent, many other dyes, as well as carbon black, can be coated on the surface of one of the parts at the weld interface. One could use dark pigments that are laser-absorbing [10] in a solvent or one can use suspensions of carbon black particles in a solvent. These can be coated on the surface using a brush, spray or even inkjet printing. Through transmission laser welding is done after the coating has dried.

It is important to recognize that carbon black and soot are very different substances. Soot forms when a polymer or other substance is not burned completely. Soot is generally an amorphous carbon in powder form with much lower surface area than carbon black. Carbon black is produced from incomplete burning of heavy petroleum products followed by extraction of organic compounds, resulting in more than 97% elemental carbon.

As shown in Table 1, carbon black frequently is categorized based on the manufacturing process. Carbon black types that have low particle aggregation and distribution were most effective for laser heating.

Instead of applying dyes or colorants on the surface or in the bulk of the laser absorbing part, one can also extrude a thin film that is compounded to include either a visibly transparent dye like Clearweld or an opaque dye or even carbon black. In this case, the thin film will act as an interlayer that is heated by the laser beam to melt the interface and allow for intermolecular diffusion, as shown in Figure 4 [11].

As shown in Figure 5, a laser transparent heat sink must be applied to the part that is subjected to the laser radiation to cool the surface and maximize the temperature near the weld interface. Therefore, this technique is generally limited to thin films or thin sheet coverings [15].

In some applications it is desirable to laser weld optically clear thermoplastics to each other with either a nearly optically clear interface or without the addition of optically clear laser absorbing dyes to one of the parts. For surface laser or infrared heating and welding of optically clear thermoplastics, it is possible to use laser sources at wavelengths where the laser radiation is absorbed in the bulk or the surface of the part. Alternatively, broad band infrared sources can be used to provide a combination of surface and bulk heating. For through transmission laser welding, two approaches are used. The first approach relies on using laser sources in the range of 800 nm to 1100 nm and adding laser-absorbing dyes or carbon black to the surface or to the bulk of one of the parts, as well as using a thin laser-absorbing film as an intermediate layer at the interface. The second approach does not include any dyes, and it relies on using laser sources with longer wavelengths where most optically transparent thermoplastics absorb the laser radiation on the surface (as with CO2 laser), or in the bulk (as with a thulium laser surface). In the case of surface absorption, through transmission is limited to thin films or sheets using a transparent heat sink. For bulk absorption of the polymer, it is possible to weld films and parts because the weld depth can range from 2 mm to 6 mm, depending on the type of plastic and laser wavelength.

Scott R. Sabreen is founder and president of The Sabreen Group, Inc., an engineering company specializing in secondary plastics manufacturing processes  laser marking, surface pretreatments, bonding, decorating and finishing, and product security. Sabreen has been developing pioneering technologies and solving manufacturing problems for more than 30 years. He can be contacted at 972.820.6777 or by visiting www.sabreen.com or www.plasticslasermarking.com.