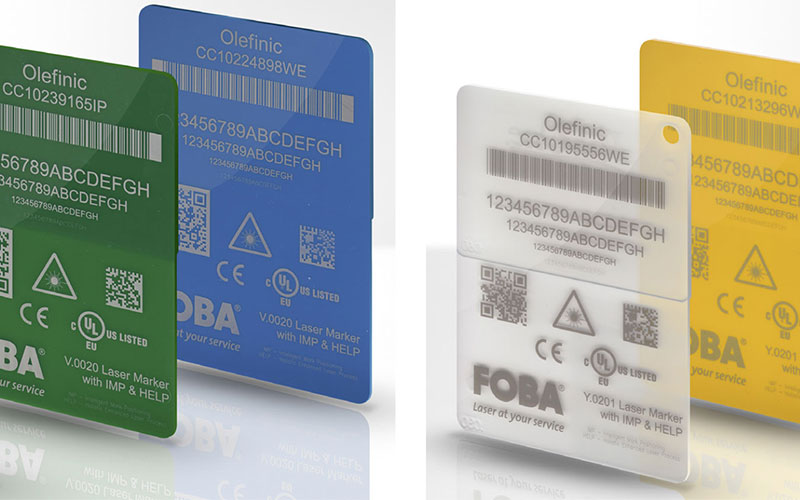 From airplane cockpits to ID cards, laser marking and engraving can be applied to a variety of products for a range of uses. Plastics Decorating sat down with Faycal Benayad-Cherif, business manager for FOBA Laser, to discuss how laser marking/engraving works, as well as issues such as the best application for use and selecting the best laser for a given application.

Plastic parts are laser marked through a process called foaming. As the plastic is exposed to the laser beam, it creates a molten area that turns into a foam of microcavities that either capture or reflect light. Unfortunately, not all polymer materials react with a color contrast when laser marked. Depending on the characteristics of the material, the resulting effect can be lighter, darker or no mark at all. A common technique to overcome this limitation is the addition of additives or dies to the material. Additives act as a catalyst to create a contrasted reaction of the laser on the plastic.

How are lasers best used for marking 3D plastic parts or products?

Since their conception, laser markers have been designed to provide the best mark on flat surfaces. The reality is that most marked surfaces are not flat. Luckily, lasers have a “depth of focus” or range of focus that allows them to mark on curved surfaces, for as much as the curvature does not exceed a few millimeters. The range is limited but covers many marking applications. Take the example of the steering wheel control module with its multi-shape buttons. Even though the surfaces are angled and curved, lasers have enough depth of focus to create a good mark.

If the mark area is significantly curved (more than a few mm), the use of an optical focus shifter or third axis is required. A focus shifter is an opto-mechanical device that displaces the focus of the laser, allowing it to follow the object’s shape. A third option consists of mounting the part on a multiaxial gantry that reorients the part as the laser is engraving. This last approach, although more complex, places the surface perpendicular to the laser, achieving a more uniform and continuous material removal rate.

What are some of the best applications for laser marking plastics?

Among the best applications for laser marking on plastics are product traceability, secured ID cards and automotive decoration. Traceability applications generally include a date of expiration and/or a 2D code that is placed on plastic packages found in commercial products. Secure ID cards, such as driver’s licenses, use a special layer of carbon-enriched polycarbonate to print names and pictures. Many driver’s licenses around the world have pictures that are laser marked on plastics. The use of grayscale lasers in combination with special plastics has made ID cards more difficult to counterfeit.

For decoration, the most common applications are found in the interior of cars or airplane cockpits. From dial gauges to the button that controls car windows, most of the texts and graphics are marked by lasers. As an example, the graphics on the steering wheel buttons, made of white plastics and covered with a thin layer of black paint, are laser etched to remove the top layer and make the white plastic visible. An LED mounted behind the button makes the graphics visible when the dashboard is lit.

What should decorators consider when choosing between a traditional vanadate laser and a fiber laser?

Vanadate lasers, based on neodymium doped vanadate crystals, are best used in situations where the heat effect needs to be minimized. Lasers react with material by sending pulses of energy. The repetition rate, the energy stored in the pulse and the duration of the pulse have a direct effect on the end result. Vanadate lasers have a shorter pulse width with high peak energy. For applications that are sensitive to the effect of heat (heat affected zone) like plastic buttons, a vanadate laser is more appropriate. The laser needs to remove the coat of black paint as efficiently as possible without discoloring the white plastic underneath.

Opposite of vanadate lasers, fiber lasers tend to produce a lower peak energy over a longer pulse duration. They are best adapted for marking on metals such as steel, titanium or anodized aluminum.  Built on solid state technology, fiber lasers are more affordable, have a longer lifetime and come in a smaller form factor. In limited situations, fiber lasers can provide some contrasted marks on certain plastics but are not always best adapted for all plastic marking.

What is fixtureless laser marking and how does it work?

Fixtureless laser marking is a patented technology developed by FOBA to address the indirect hardware cost manufacturers face during production. The innovation allows for the marking or engraving of parts without the need for fixtures.

Today, to guarantee a repeatable laser mark placement, using a fixture is a must. Designing the correct fixture is an iterative engineering process that includes steps such as prototyping, testing, training and documentation. Depending on the number of different products that require fixtures for laser marking, the cost of tooling, including engineering, can easily exceed hundreds of thousands of dollars per year.

Fixtureless laser marking uses a camera system built inside the laser that combines a set of tiled images to reconstruct an image of the marking area free of perspective distortion. Eliminating perspective distortion from the camera image enables a robust position alignment regardless of the position or the orientation of the part. Within a second, the object orientation is known and passed on to the laser so the part is marked accordingly.

What are the main advantages of fixtureless laser marking?

The main advantages of fixtureless marking are cost savings, simplicity of use and automation. Cost savings are achieved by eliminating engineering time, streamlining production processes, and lowering production and maintenance costs. When fixtures are not required, operator training is simplified, and automation is easily implemented. Parts can be processed in a random order, loose on a conveyor. No locating or positioning mechanism is required. The results are a higher and faster throughput, a lower reject and production cost, as well as a faster financial return on the investment.

Dr. Faycal Benayad-Cherif is business manager at FOBA Laser, a Danaher Company. He has more than 25 years of experience in the innovation, development and management of laser-based products. Author of publications and patents, he holds degrees in biomechanics, electrical engineering and physics. He is a recognized speaker in the automotive and medical industries. For more info, visit www.fobalaser.com.